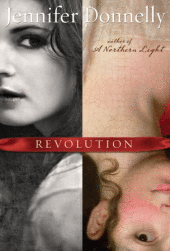 This book is one of the best books I have read in years. It was recommended to me by friend Krisha, and I loved it so much I have read it twice and listened to it once. I have been a Jennifer Donnelly fan since I read A Northern Light back in college. I love her strong female protagonists and her ability to write a complete story, with nothing left out but not boringly spilling every detail. She grasps the reader and holds on through the whole story. Absolutely amazing, though I do think her books are aimed at a generally female audience.

Revolution is a historical fiction novel with two stories intertwining. First you meet Andi. She is an anxiety ridden senior in a prestigious private school in NYC. She is dealing with the tragic death of her little brother, for which she blames herself, and is focusing all her rage and hurt into her only passion in life, playing guitar. But she can't get over the death of her brother, and this leads her to the brink of her own suicide, often literally. Andi's sarcasm and cynicism immediately drew me into liking her. She has a bit of a "This is who I am, F**K you if you don't like it" persona that is clearly a facade, but leads to many hysterical encounters immediately within the novel.

When her father forces her to go to Paris with him to finish a research project in order to graduate from high school, she stumbles upon an old hidden diary. In this diary we learn the story of Alexandre, a girl the same age as Andi that lived during the French Revolution. She had written a diary to keep track of her harrowing story of defiance as she did everything in her power to save Louis Charles, the son of Mary Antoinette, who was locked in a tower and left for dead during the revolution.The parallel between these two girls is immediately apparent. Both are dealing with the stress and depression of losing someone they care about and were responsible for. The intertwining of the stories culminates in an out-of-body experience where Andi is forced to face her past and to fight for her future, instead of giving in to her depression.

While the main characters are extremely well developed and you can immediately be drawn into their lives, I also loved the role of each of the supporting characters. Each character you meet in this novel plays a role, but not in that "overly complicated have to keep track of everything everyone says" way. They contribute to the novel in a way that helps you understand the main characters that much better because this is the life that is surrounding them.

One aspect of the book that I loved was the inclusion of the music. Throughout the entire novel we see how Andi lives through music and how it intertwines into everyone's life and connects them together. Also, when Donnelly names specific songs, if you know them (or youtube them, let's be honest) you can see how fitting they are and they really help set the tone. If you don't get all the music references, you aren't going to be "missing out" and I like that as well.

I think the overall development of this story was amazing. It was clear that Donnelly put a lot of thought and research into this novel and it just makes it phenomenal. It was the type of book that as soon as I started reading it, I hated to put it down, even for sleep. Andi's internal struggle coupled with Alex's deliberate acts of defiance in one of the most dangerous times in France is such a pairing that you can feel the connection immediately. And the end is hopeful, which is rare. You usually get the depressed or the ridiculously corny, but not with this novel. I highly recommend this book to anyone.

The cover art is pretty fantastic, too. It has both Andi and Alex, with the key on the red ribbon. Cool thing about the key? It ties them together. Andi originally wore as a token from her brother who died, but it later opens up the hidden compartment of the guitar case that hid the diary. Also, the red ribbon was worn by family members of people who had died via guillotine during the French Revolution. So in my opinion, the cover is a definite win.
Posted by Sabrina D. at 9:14 PM